Prologue
"When 6 guys run behind a gal, it means she is one hot good looking babe
When 6 gals run behind a guy, it means wait for the last part dude!"
I know the title can immediately make most of you to scroll down and have a peek of some pics from the playboy magazine. So its either the dirty minds of the readers :) or am trying to make my blog famous! Anyways hope my blog post turns up in google when some one tries to search for Playboy.
The below is a true hallucinating story from my college days. Had a huge fan club following me in most of the Social networking sites, try searching by the name Brad Pitt. ( "I" was not mentioned in the beginning of the sentence) . Anyways as said, I used to move my hands, legs and hips otherwise called as Dance. And because all the students in my college were from MJ ( Mokai Jockey) community, no one knew to dance. So I was very popular especially among the girls. So popular that I was chased by them constantly ( for a different reason entirely).
Then came Goo-coool ( Gokul ) .The cool headed guy he was, appeared from nowhere to take the girl population by a storm. His Voice was the talk of the town. It was so loud that , people use three layers of ear buds to hear it normally. One can imagine what will happen when he shouts. Anyways it was one Fine Wednesday evening when a group of good looking gals from my college were hunting for someone. Like Chandler I said "Save your time ladies, am just here" , but then they said something harsh in Japanese, hard enough for me not to reveal it. 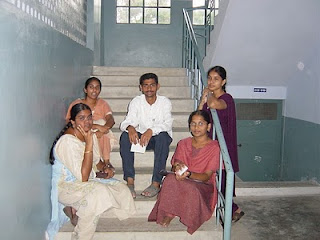 They convinced me to bring Gokul to them, so finally I found him eating some leftover food in the hostel. When I told him that some of the cinema heroins were hunting for him and so the next moment he disappeared.
As I went by the lobby of our class I was shocked to find him surrounded by 6 most prettiest girls,( some of them read my blog .. so prevention) from my department .See the picture above. Immediately I realised my chemistry class lecture , something about boiling point, I felt it right in my stomach! I realised that there was a new Playboy in the college and I was dethroned! So I took a stroll out to regain my composure and came back to see what else was happening when I saw this. 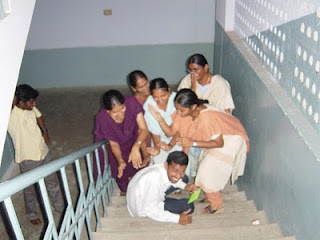 Amen after that.
Moral & End notes : I was still the playboy . Later part of my story will not be revealed for security purpose. Please read the disclaimer if you are wondering where the truth is, in the above post! cyu fellas!
Posted by HaRy!! at 2:38 PM

ThE OnE WiTh ThE PrOpOsAl

Each one has a different way of proposing. I strained my Kidney to think and find out the ways in which different people would propose. This is going to be a stupid post don't blame me for not reading my disclaimer.Then again all my posts are stupid and you guys read it, so never mind.

For all Tamil speaking fans am sure you know the rhyme language of TR, here goes

I want to say
am not gay

I am sitting on a stove
so give me my love

What Love? I am in love with my red underwear already, then what. Poda pani(pig in tamil). 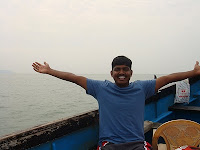 I wand do make love to you, please do love me, all my life I think this thought in my mind, so please give me the pirst (f) love. 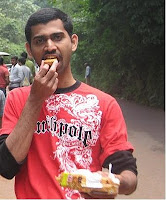 Dear, whether I am in love with you Don't think. others love you. more than My love, compared to others is nothing. Please like sundaram i also love you. Don't you love he? is also in love with . Accept!!

He meant to say,
Dear,am I in love with you? Don't think others love you more, my love. Its nothing compared to mine.
Please, like sundaram I also love you. Don't you love? He is also in love with someone.

( I love his blogs so if he is angry then expect a dozen of swear words post from him).

HaRy
As I approach Penny ,the mood turns into a frenzy romantic mood with a background Ilayaraja song, I wear my branded Adidas shoes , Pepe Jeans and Red Polo shirt with an Oakley coolers. I stepped up to her to use all the words I learnt in GRE classes. Penny whirled around and looked at me and said " Two large Chicken Pizza's please".

Any of you have proposal stories? please do share the eggs & tomatos you had!

aDiDas - iMpoSsIBlE iS NoThInG

Sachin, Beckham, Sania Mirza, Broad.. the list goes on. Yes they were/are the brand ambassadors of the billion dollar German company Adidas.The caption Impossible is nothingcan easily be related to these stars,considering their hard work and stardom. But gradually Adidas realised they need to concentrate on personalities who match the caption, so they are in talks to sign off some of the real" Impossible to Possible" makers. 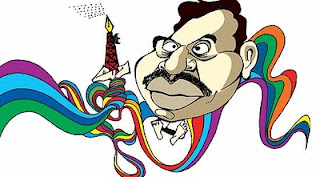 Raja... as the name suggests The King, and indeed he has proved that! Raja is the Environmental minister(supposedly the telecoms minister) who sold 2G spectrum at the price of Bread. Well when we have been hearing about MP's fraudulent activities for years and the usual figures are always in Crore's, but finally after all these years we have a winner , the scam almost a % of National GDP (60k crore..now stop counting the Zeroes, I gave up a while ago). Clearly a powerful contender for "Impossible is Nothing" , So Adidas approached Raja with a reasonable price, but Raja astonishingly agreed to sport the gear for 10rs. Well under the table is a headache, which the German giant is not aware. Earlier he was referred as Jungle Raja, then DMK Raja and now Spectrum Raja

No 2 : pAuL tHe OcToPuS... Fortune teller 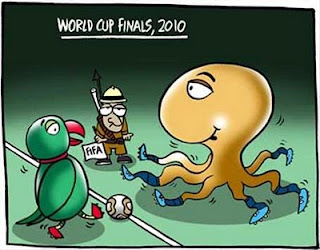 For those of you who think that octopuses are nothing more than a 8 legged monster,Think again. Introducing Paul the fate decider. Over 50 years of football, and football has always been the show stealer during every world cup, but this year the Parrot and the Octopus stole the show. In India we do Holy Yagams for our cricket team to play well (in the pubs,clubs,with people's feeling) , the level of belief has gone to the next step. Paul's prediction finally paid off and he is now retiring, tired of the kicking he had to do. Adidas tried to design a footwear impressed by the Impossible prediction by Paul,but to their dismay Paul picked Nike. Poor Adidas should have sticked to designing footwear for sportstars. After watching all this I am now naming a price of 10k paise for the Octopus and if the owners are ready to sell, then am game for it. But only for 2 years as Paul is due to expire 2012 before the next football.

No 1 : Alfie the Oldest DAD

As we are all Adults (except me),I take this daring step to introduce Alfie Patten. For those who think he is just an other 13 year old, nope he is the father of Maisie Roxanne. Adidas tried to rope in with millions of Pounds with a lot of Tax waiver, but poor Alfie hardly knows how much nappies cost, does not even understand the word TAX. Now the question is will they join the same school together? If Maisie cries and so does Alfie, then its as Father as Kid!! Surely this deserves to be the first in "Impossible is Nothing" Category. For in a small part of India when the Biology teacher started the class with the lesson " Reproduction... organs..", blah blah.. the kid shut his ears saying " Siva Siva". The kid is now the great blogger of this post. ( Note : No sarcasm means truth) . Anyways hope Maisie ( baby of Alfie ) does not get married before Alfie does. Check the video for a exclusive interview with the Father of the Millennium. Oh and Happy Father's day :) !

Oh and I forgot to mention, I declined the offer from Adidas long time ago.

Prologue : H2SO4 + me = Blabber
When we talk about chemistry, a lot of things zooms across, like hints development ( though i really did not understand that term until I failed in English-2) .

I tried to give a complex definition of Chemistry like Aamir does in 3 Idiots, but I didn't quite have a good dialogue writer, so let me stick to my basic nonsense. So let me relate an incident which happened in school days. Days I mean, when I did not bunk school - Sorry fellas it was to my bro who will disagree.
Chemistry is a tiny little alcoholic benzene subject, but fellas it's also something that works between a stupid boy and a very studious girl. Why... Let me explain,
My Chemistry teacher was Charles Durai, he was more of a Charles Durrr.. Because of the durr he produced. Anyway it was in my Tenth std when Chemistry labs were introduced. I was the class representative because of the leadership qualities exhibited by me (giving proxies to friends, games periods, and beatings from class teacher on behalf of other classmates..etc .. accolades). And Penelope had the same straits so she was the girls representative and assistant to me.
The whole class (bribed by me) thought we had a pleasant chemistry between us. Note : The title of this post is Chemistry, so you'll find chemistry tons of time between. We had beautiful times, called as the Golden Era . The Golden Era will be a separate post, so watch for it. In order to impress her I would do weird stuff, now even Blogs are one of them.

Because Penny was very sweet she offered here record notes and other stuff to carry me, obviously she shud be crazy abt me as well. Quite a couple of sessions later in our chemistry labs, I was still not able to find in which test tube Alcohol is placed. As I figured Methanol and Ethanol were there, Alcohol should be some where around. Being the perfect scenario one day, Penny was all dressed up like an output for a high volume reaction, like Magnesium burning in dry ice ( To prove I really studied my chemistry book).
So somehow I seated myself near her, with an attempt to make the chemistry work in the chemistry class taught by the chemistry professor. As our Professor began his lullaby, I heard Ilayaraja music in my ears. She took the test tube from me and started the experiment. It was a team experiment and I had shooed away the rest, in order to make the chemistry works b/w us. Sweet as she is, noticed me not listening to the class and moved away from me. I reckon Shyness perhaps. 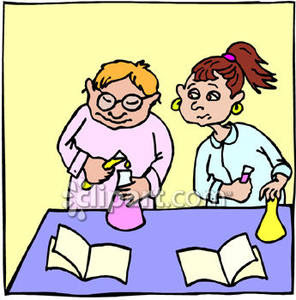 As we started our experiment she asked so many things to me “pass me dil.hcl, Co2, Dil.H2So4..Blah blah blah..." , I hardly listened as I was reaching my melting point. One point, then she yelled “CONCENTRATE", startled I poured the Conc.H2So4 in the half mixed liquid and POP... BLAST...I do not even want to share how I looked. Whatever was is in that, did not like the sulphur. I could see she had reached the boiling point now. RIP HaRy ..!

Note: If there are grammar and any other English mistakes, do not forgive me as I learned it from you guys! :) And as my disclaimer says, the above is fiction... so pls refrain from imagination.
Posted by HaRy!! at 5:35 PM