This post as my disclaimer goes, is basically aimed at complete warp humor and not to target any one's personal belief!

1. The Black Cat crossing the Road is considered a Bad Omen when you start somewhere - Oh yeah poor one with nine lives, I can send a Black cat everyday to trot in front of my Boss's house:) 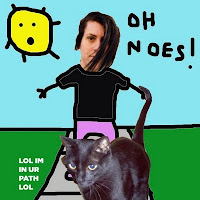 2. Do not sneeze or cough or exclamation when someone leaves for a journey - Last time I had to sneeze and controlled so hard, otherwise my uncle's US trip wud have been cancelled bcos i sneezed? Or wat :)

3. Do not cut your hair or Shave on Tuesdays/Fridays - Now what ll happen if I have an interview on a Friday/Tuesday? I dread that!

4. Do not sneeze odd no.of times when some one is going out - Hmmm, can throw some pepper on the squeezer's(there is such a word rite?) nose, so he can sneeze again.But if he sneezes twice to make it ODD, then God help.

5. Going Beneath a Ladder is not a good Omen - So push the ladder, even if someone is on the top painting something, throw him down..so your day will be bliss.Not sure abt him.

6. Eating curd before Exams bring good luck - Now am a topper as well ( now its up to yu guys to believe it) , used to score 100% in all the subjects( My alter ego is abusing me) , but then i never have touched curd my entire Life....how is that? (agree there is scientific fact for coooling..but how does it work for me :-) .he he

7. T.Rajendar enters politics - Now that's the best superstition or comedy piece...and am not sure why i put this here.

8. If your head bumps with another person a black dog might bite yu later / Horns might grow on your head, so bump again with the same person - My Friend who saw this in the Genelia movie, thought he can bump into a number of gals and take this excuse to bump again, but ended up bummed in his nose.

10. Opening an Umbrella indoors bring bad luck - So most of the cine actress's life is ruined and have only bad luck.

11. This is the worst one - Girl forced to marry a DOG LINK

Well most of them are harmless, such as senti - watches, dress, jewels, pen, soo many.... but the one's that can be the turning point in one's life..God save them!