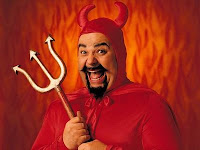 Lately some where in YouTube, I happened to see this Church of Satan and started to check out some bits. I came to know Satan is a very good person / spirit or whatever. Now why do I say that, well hmmmm as most of you would know the story of Satan. He was called as Lucifer and couple of days ago (because some one told me that if its a year here its a day in spiritual world) .
So our hero thought its easy to overpower God and devised a plan, to join forces with all those bored of God and eventually got big mokai and was banished from heaven. So from then on the Devil came into existence in the form of serpent, monster, like the Onida TV ad. That's the theory from Christianity.

Although now Dan Brown might think ancient history is depicted wrong and the satanic cults existed from Louis XIV in France and until Hitler's Nazi army. Its almost like biasing the statement of a great blogger ( OK me!) Well personally I think Satan/Devil is cool. He chose to rebel against God to proclaim himself. At least he was truthful in what he wanted.
So sometimes he is often referred as the Fallen Angel, the Devil who bribed Eve into a bite of Apple thereby making bringing about huge profits to Calvin Klein, Landmark, Raymond and many more Apparels. Well then he is also responsible for the porn industry to raise, if Eve had not bitten the apple I doubt there would be any confused teen who would glue up all night for a naked pic of Paris Hilton on the web.

Anyways finally I remember why I wanted to write this blabber, yeah Satan is kool. You know why? !

This world is full of people of two types. One - those who Believe in God, Two - Non believers and then came the third kind - Sin in the name of God! The great GOOGLE does not even seem 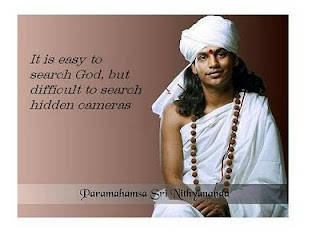 to have a single acronym for this! No wonder these kind of people are powerfully placed ! These people tend to confuse between being clever and barbaric. A Classic example is a modern day Swami and easily spotted Nithyananda Swami. Apparently he thought the Gods were outdated in technology and were full of myth with principles alone, Secret Video Cams ... yeah God knew that as well ! And the latest bit is that Nithyananda claims himself to be Nithya,
I mean he is a SHE , check this out

http://timesofindia.indiatimes.com/india/Im-not-a-man-Nityananda-told-CID-sleuths/articleshow/5874923.cms
Now he is just one of the third kind, we all fall under several sub categories of this kind. There are so many of us who cheat our conscience and yet finally blame it on God or ask for the Almighty's forgiveness.
Whatever it is.... its your call finally, please do not blame God for your non-righteous actions. So what do you think? Satan is a better as a fallen angel, than we are? well, he at least chose to go against.

If any of the facts are wrong please blame google and my poor reading skills , not me.I tried this bit of satire post... well ll stick back to my dumb comedy from next time :) .. Happy weekend fellas !
Posted by HaRy!! at 5:17 PM