Here is a recent conversation between two of my friends in Adyar, I came in last min..


Mike Vaayan(Loud mouth) as you know from Link and Paavadai(Frock..as his pants are like that) I'll will be writing an exclusive blog on him.


Paavadai : Ya da i heard, lucky fellow roaming the world


M : First do you know which country's capital it is?


P : Dai, you were the one who said Railway Busstand to the English Policeman...who is stupid?


M : Fine , that was not intentional, but why did you say in the Client conference to your client as " Some issues are BENDING" instead of"PENDING"?


M : But we both are OK..remember Maadu (Link)....he sent an application to Anna University requesting to give him a certificate for completing his Bachelor Of Education(BE - Engineering!!) in English Medium..ha ha what would have Anna University thought of him.


P : Ya i remember him telling that you were the great one who reviewed it!..Yu and yur dabba english..


M : By the way, today we have this traditional dressing in Inautix...so me goin in Dhoti...


P : So you are the Chinna Gounder(for those who dont know chinna gounder, its a old serious comedy movie by our captain (Link))of your dabba company..

M dresses up and he looked so funny that we thought we will take a pic of him...

(The tamil words in the pic mean that -

1. All eyes on you only MR. Small Panchayat leader, 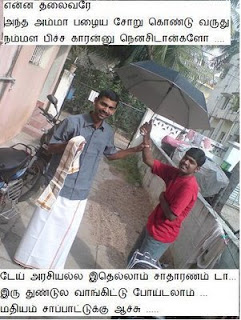 2. P SAYS: That lady has brought us old food and thought we are beggars ,

M says : These are all common in politics, get two pieces of that, we can use it for afternoon meal!)

When i first came over to UK i was very glad that i have escaped from the wrath of the deadliest mosquitos from Adyar . Then i heard the story of the Great Plague in London @ Maddam Tussads museum and was gasping at how a Rat kingdom had London run helter shelter!! London has quarter of the city in Underground most of the time , and i guessthats the reason its ridden by rats. Thankfully i was put in Southampton , so i thought it was a great escape.

All was fine until i shifted house to a new one and it was clean and much better than the previous one. When one day we were cooking so much of Indian Sambhar and vegetable curry,looks like we had tempted the Rat which was into hidding and feasting only on English food..like bread, cereals and butter, so out came the mouse ...and my friend felt the wriggle in his pants and dropped all of the sambhar...of course it spilled on me, or maybe that was his idea! Egad!! we didnt know wat to do as we both were not Rat-killing experts.

We decided to name it as Stuart Little.... as we didnt know the name of the mouse from Mouse Hunt movie. We devised a plan to outwit Mr. Stuart, Now it was evident after a couple of sightings that, Stuart had his interests in Indian Curry, we decided first to test in which the interest if Stuartlies by keepin Curry and Chocolate adjacent, come morning and Curry was gone!! so we now made a curry and let it for a couple of days in hiding to get spoiled, assuming that Stuart wud not be able to take the spoilt curry.

We even tried to scare it away by putting up these kind of pictures...but we lost finally!

Now we had to switch to Plan B... compromise with Stuart...thats what we did finally, he agreed and he never crossed the limit and so do we...

Our deal was that , he should not nibble on fresh food and would eat what is kept seperate for him and his deal was to play the video of Tom & Jerry once in a week , so that he can laugh at Tom's dumbness. So now whenever i watch a movie in my laptop, and if there was to be a Romantic scene a peanut will be thrown on my face from Stuart, who sits beneath my couch and givesme a glare...that means turn the monitor, so that he can see as well :) . And yeah..it gnaws everything in excitement when it watches Mickey Mouse cartoons....and even jumped from the table ! 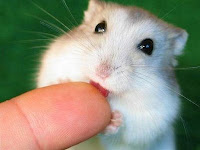 Adyar Amarkalam
Adyar. This was and has been my home for the last 2 years and has continued to nurture some Young talents. Yes it was we the Adyar Guyz. Am done boasting with the baseless intro, for those who think am going to write about Adyar Guyz wonderful contribution to the society, please ....!

Some trivia...
We are almost a dozen people living here and call ourselves as Adyar guyz and we have a bit of rivalry with Velachery Guyz as they copied our likes.

We have been blamed by our neighbours more than a god knows how much times for not keeping quiet, thats weird is it wrong to shout " dei, paradesi naye(some gibberish language to abuse us) " @02:30 in the night..err morning .

We successfully have won the bet match against the adyar school boys,the 7th time after throwing their cricket balls out of the ground several times & breaking bats and make them wonder rather to pay the bet amount than compensate the kit.

We are highly reputed in IT organisations, and have heavy work from 10 in the morning till 5 in the evening with two hours of lunch break.

We like eating and half of Adyar's grocery shops and vegetable storekeepers deliver to our doorstep with lots of freebies.

We have hired two cook's, owing to the fact that we still need to eat on when one of them falls sick.

We have water in abundance and no. of people taking bath a few.

We also have professionals in C, C++, .Net, Mainframe, AS400, Advanced Java,SQL,DB2, Oracle ....all sorts of technology , sitting in BENCH.

We set examples to our juniors - need not explain what!

We have been lauded by Electricity board for continuous high volume bills inspite they thinking we are running some kind of factory.

We successfully have made neighbourhood beautiful north indian girls to relocate after my friend went out brushing in the balcony. yes i forgot in a pink underwear.

We house most of the mosquitos in Adyar, thereby makin Adyar a Pest-free Zone.

English is the Vernacular Language, though several attempts have failed.

We have two Rivals.. Velachery Guyz who imitate our style and Opposite house thatha... who thinks Bachelors should be banned..wonder how he crossed.. We fight only for one thing - who manages the common account, as it takes a lot of risk, but very benifactory :) .
let me introduce the occupants, out of which ll be writtin in detail about them

Sundaram - He is the HR of our room, his leelaigal will be put up in a seperate Blog. He is so clean and talkative. he washes his underwear twice a day, but he does'nt wear them..so wonder whose underwear he washes anyway.

Thillai - He is the Gadget Guru , he gives rave reviews about any new gadget that is launched and has recommended many a time for professionals also. He knows abt PS2, Xbox, all Apple products,Mobiles,Laptops,By the way he has a Nokia 1100 , Desktop with a celeron 500 processor and a FM Radio.

Hari - Thats me.. am the peter of this room, i try speaking in English in unecessary places and get bulb by sum1 asking me" tamil, theriyum thane, aparum ena"(yu know tamil right, then y the scene)

Gokul- He's a multi talented freak, loud mouth and he is our Sharekhan, he is a little NDTV profit and applies personal loans and then invests them in shares and also gives free advice to others to buy. Yeah and he lost like nearly a lakh in the dumb shares that he has invested. Have written a detailed blog abt him as well :)

Saravana Kumar - He is the Entrepreneur of Adyar guyz and nicked as Kadiyan for his extreme irritation. His ventures included the banned Gold coin business, Amway , LIC insurance and kadiyan LUNGI forgot to tell he works in Wipro also by the way.

T N Karthy - He is the Glutton of our room but maintains a very healthy diet and tries eating only 6 times a day.

Cyril - He is a walking encyclopedia and can explain about anything yu ask, but the first question he asks to yu is yu are aware anything abt it and continues based on yur answer, to quote an example back during college days, Ramesh went over to cyril to get some idea on data structures before exam, after confirming that Ramesh didnt know a thing about DS, cyril explained sooo well that Ramesh scored an arrear(failed yes) in that exam...turns out Cyrilz coaching!

Thiru - All he can do is speak the truth! today he is the team leader, tomoro the Project Manager, later on he gets married and he was asked to goto Japan,Australia,US, UK and seems he turned down all these offers bcos of his interest! (or,.. yu know!!) He is the techno person of our room and no one dares to speak anything technical to him!


Saravanan - Our walking newspaper can name any thing happening in the town, country except what job he does. Also his honesty and very sincere to the rules. He has just constructed a house in the temple's property of his hometown :)

HariVenky - He is the pillar of our room, though now he is put up in Hyderabad he was a part of our vanathapolai family! Have also written a detailed blog abt him
Here is one view of our peaceful life..
Posted by HaRy!! at 4:25 PM